The successful French business Henri Fayol (1841 – 1925) moved his up the scalar chain of the mining company, Comambault, and became the companies head. Fayol later recorded the methods of his success in books such as ‘General and Industrial Management’. In this particular book he discusses the fourteen principles: authority, centralisation, discipline, division of work, esprit de corps, equity, initiative, order, remuneration, the scalar chain, stability and tenure of staff, subordination of individual interest of common good, unity of command and unity of direction. These fourteen principle formed Henri Fayol’s Administrative theory, which is a collection of principles designed to improve the productivity and efficiency of a business. Fayol’s administrative theory is still visible in organisations in today’s world. For example the scalar chain and division of work are visibly demonstrated in the New Zealand organisation, Hell’s Pizza. The scalar chain shows authorities both inside and outside of the actual store; and also helps show the division of work (or division of labour) present in the organisation.

The scalar chain according to Henri Fayol in his book titled ‘General and Industrial Management’ (1967) is a pyramid of superiors starting from the top, being the ultimate authority, down to the bottom, lowest ranked workers. As an individual progresses through, and up, the scalar chain they gain higher levels or authority and power within their organisation. This principle strongly enforcers another of Henri Fayol’s principles, unity of command; the scalar chain reflects the distribution of authority and power throughout an organisation which demonstrates a singular ultimate power at the head of the organisation. The scalar chain and its distribution of authority can also be demonstrated physically in two ways:

Fig 1: (Similar to the diagram used in ‘General and Industrial Management’ (Henri Fayol, 1967). 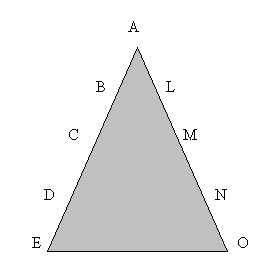 (Image adapted from http://www.firstmonday.org/issues/issue6_11/dafermos/ acquired through a ‘Google Image’ search, note that this was the only reason this source was used; no information was extracted from the written material, only the picture) 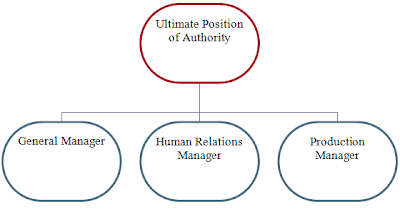 (This is a basic diagram involving only four members of the organisation; a full diagram should involve all the employees (Samson & Daft, 2005)).

The purpose of the scalar chain in administrative theory is maintains the idea of unity of command and authority but at the same time provide employees with the opportunity to use their own initiative and judgement. As well as enforcing unity of command, authority and initiative the scalar chain aids the flow of communication between employees and superiors. Each employee has an individual from which their instructions or orders come from and to which they can go for advice, with permission from their superior an employee may communicated directly with another in a different field of the organisation; e.g. a general employee from distribution may communicate directly with a general employee from marketing or production. This “gang plank” (Fayol, 1967) approach allows communications and transmissions to be finished and deals agreed to within a matter of hours compared to the delayed effect of both sides of the communication reporting to their superiors until the decision is made at the head of the organisation. The physical representation of the scalar chain portrays the lines of authority and can provide and incentive for employees to strive to be better and more efficient at their job by either subconsciously or consciously setting goals and motivating them to reach higher levels of authority.

This principle brought to light by Henri Fayol is still apparent in organisations today. For example the New Zealand organisation ‘Hell’s Pizza’ uses the idea of the scalar chain to motivate workers, improve efficiency in communications and enforcing the authority of superior positions in the employment of Hell’s Pizza. Hell’s Pizza have several employees in each store as well as outside the store locations, however all these employees are fitted into the scalar chain and given the opportunity through hard work and efficiency to progress into a higher status level with a greater amount of authority and power associated with it. A simplistic form of the scalar chain for Hell’s Pizza is as follows: 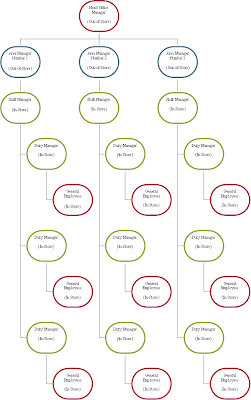 The scalar chain developed to help Hell’s Pizza New Zealand to motivate their workers and enforce authority has limited effectiveness. While it does work in terms of motivation the scalar chain does not aid in enforcing the authority of certain superiors. Theoretically the scalar chain should function without flaw; however this is assuming that the thirteen other principles described by Fayol are fully functional. In the case of some Hell’s Pizza stores (not all) the duty managers and/or higher level employees are not respected and therefore a proportion of or even all the orders from this individual are disregarded. This freedom of choice in accepting orders is known as the ‘acceptance theory of authority’ (Samson & Daft, 2005). In terms of motivating workers the scalar chain meets its purpose; when workers are first employed they started at a low level, generally a general employee, however after spending a length of time as an employee and showing a set of skills and hard work an employee is likely to receive a promotion to a higher level of authority. The motivation of achieving a greater level of authority and power is coupled with the opportunity of a larger pay, which aids in motivating the workers to progress up through the scalar chain.

Division of labour, or division of work as referred to by Henri Fayol, is about dividing a task up into several smaller tasks for employees. This means that an employee can become specialised in a certain area. An employee that becomes specialised in producing one product or producing a single part of a product will be able to focus his skills into becoming more efficient in a single area of the organisation rather than in several areas. This limits the need for training and makes learning better techniques easier. A specialised employee by theory will be more productive than a non specialised employee.

The idea behind specialisation or division of work according to Henri Fayol is increase the efficiency of an organisation, allowing them to produce more of a product at a greater level of quality, but by using the same amount of effort that would be consumed by a non specialised organisation (Fayol, 1967). To achieve this division of work minimises the number of objects a single employee needs to pay attention to and concentrate on; this allows a greater level of concentration on a single area in production increasing the level of expertise in that area, specialisation also eliminates the time it takes for a worker to switch from one job to another and provides an environment for invention (Stiglitz & Walsh, 2006). For an organisation to become more efficient generally means that they are making a greater level of profit in the same time period and/or at lower costs; a specialised work force needs only to be paid for their skills (this often means the employees of companies such as McDonalds or Hell’s Pizza are lowly paid) saving the organisation money in terms of wage cost but at the same time increasing the level of output.

In the New Zealand organisation, Hell’s Pizza, the employees are trained in certain areas, dividing the work load up into several sections. Fayol’s theory of specialisation is demonstrated at two levels in this organisation. When an employee first comes to Hell’s Pizza they are given a basic training (lasting no more than half an hour) on each individual job within the store, however they are trained thoroughly in one particular area, such as ‘make’ (this is the physical making of the pizzas). There are several subsections of the production of pizza at Hell’s; these are: phones and counter (taking the orders), fryer (cooking the deep fried food), cut (cutting and boxing the pizzas), make (applying the toppings to the pizzas), driver (delivering the pizzas) and managerial roles (organising and controlling staff). However on a busy night these jobs are divided even more thoroughly making workers even more specialised, for example ‘make’ would be broken down into three areas, the application of: vegetables, meat and cheese. Fryer is also broken down into cooking and packaging, making employees more specialised and productive.

In this particular organisation the concept of division of labour works extremely well and is quite effective. This principle needs to be balanced and according to Fayol (1967) has limits that should not be exceeded. Hell’s Pizza seems to have found this balance with specialisation maximising efficiency in it employees but not producing brainless unmotivated staff. Within this organisation the purpose of division of work has been reached, with workers specialising in specific areas in order to produce the products at a greater pace and great quality; allowing a larger profit to be made by the organisation. However specialisation does have a down fall, the reduction in skills of an individual worker lead to a reduction in the average pay rate of employees of that organisation (Fitzsimmons & Fitzsimmons, 2006). Due to division of labour allowing a company to pay only for the skills that is required to perform a specific task a low paid work force becomes less motivated to do well.

The Frenchman Henri Fayol put together the fourteen principles of administrative theory, and although adapted due to changes in the industrial environment, these principles are still visible in organisations, such as Hell’s Pizza, today. Both the principles of division of labour and the scalar chain are evident, and used effectively to fulfil their purpose, in Hell’s Pizza as an organisation and work force. Although some components of these principles are used more effectively than others, Fayol’s approach to management has proved useful in the productivity and efficiency of business’ over eighty years after his death. The use of division of labour or specialisation by Hell’s Pizza proved extremely useful in boosting productivity and when used effectively, as done by Hell’s Pizza, the rewards of specialisation are great. As well as specialisation; the use of the scalar chain to motivate and enforce unity of command and authority aided in the up-rise of greater productivity within Hell’s Pizza.