New Zealand's Microeconomics: A Look Into 'The Fat Tax'

Obesity, defined in the medical dictionary by Dr. Frances Mackenzie as existing “when bodyweight is 20 percent greater than normal” , is a growing problem in all the western countries, including New Zealand. In order to ameliorate this problem the consumption of calorie dense and high fat food must be minimised. One suggested method of doing this involves the government passing a “fat tax” which would increase the prices of high fat foods; potentially decreasing consumption. In order to predict the impact of the “fat tax” research and an economic analysis must be conducted. For the most accurate result the analysis should compare the “fat tax” to an alternative method, aimed at decreasing consumption, and a prediction and recommendation of action should be made.

According to a news article on Television New Zealand’s website scientific testing on biological effects has indicated that fast food and other high fat foods are mildly addictive. The fat content causes the person to slowly become more and more resistant to Leptin and Galanin, hormones that control eating behaviour. The lack of effect from the Leptin and Galanin hormones means that the consumer is unable to control his or her eating habits, and therefore will eventually eat themselves into obesity. The addictive aspect of high fat foods means that the demand becomes slightly inelastic.

Price elasticity, the responsiveness of a good or service to a change in the price of the commodity, is very important when calculating the effect of a tax or subsidy. It enables the prediction of the effect of the government’s intervention, thus its effectiveness. In this case we see that fast food, and other fatty food’s, have an addictive element; this means that the commodity may become a necessity for some consumers. If a good is a necessity will mean that it is price inelastic. When a good or service is price inelastic a price change in that good or service will evoke a less proportionate change in quantity demanded. The inelastic nature of high fat foods indicates that the proposed “fat tax” will cause the price of the goods to increase but quantity demanded will decrease only slightly (less proportionate than the change in price), as illustrated below in diagram (A). 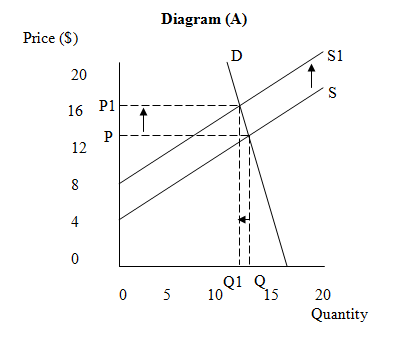 The diagram above shows an imaginative tax of $4. This $4 tax increased the price of the commodity by $3.50 but only decreased the consumption by a quantity of 2. Price increased by 3.50, quantity demanded decreased by 2. This diagram does not show the exact effect that the “fat tax” would have on consumption of high fat foods; however it does give a good indication.

Although product taxation is an easy method for the government, and means that only those who consume the commodity will pay the tax, the inelastic features of addictive commodities mean that the government has not reduced consumption greatly. Therefore an alternate method may be employed, such as subsidising an advertising campaign or healthier products. The New Zealand government has subsidised advertising campaigns throughout New Zealand to help reduce the level of high fat food intake. Campaigns such as the ‘5 Plus a Day’ have had government aid when it came to advertising costs. Also McDonalds have introduced their fresher, greener, healthier menu accompanied by a massive advertising campaign promoting the health meals, although this is not subsidised by the government the morals of this change in McDonalds menu is complementary to the purpose of the ‘fat tax’ and follows the idea of subsidising healthy food products. The government subsidy on healthier foods has the opposite effect as a tax, the price of the commodity decreases and the quantity demanded increases.

The addictiveness of fatty foods, due to the fat breaking down Leptin and Galanin hormones which control eating behaviours, means that the proposed taxation of high fat foods will cause price to decrease but only a less proportionate decrease in quantity demanded, the demand curve is price inelastic. The inelasticity of high fat foods in New Zealand causes the majority of the tax to be paid for by consumers rather than producers; in order to reduce consumption even further the New Zealand government could re-circulate this money, investing it into an extensive advertising campaign for healthier foods as well as subsidising companies which sell those health conscious products. Employing both the methods of the ‘fat tax’ and subsidising healthy food would be a productive and cost effective means of reducing the obesity in New Zealand.

“Cutting the Fat; How a Fat Tax can help fight Obesity” published 24/08/04 by Diabetes New Zealand and Fight the Obesity Epidemic, Inc.

Posted by The Asylum Music Group at 7:05 PM